Our Value for July is DETERMINATION

Read more about our
Values Programme

Nine of our Chantry girls attended the first round of league matches on Tuesday 5th November.  We travelled to Ashcroft High School to play on the new artificial turf pitches which were truly amazing.  The surface was just like a spongy thick carpet and quite slippery due to the relentless drizzle all morning.  Despite the weather our girls played three high level matches. 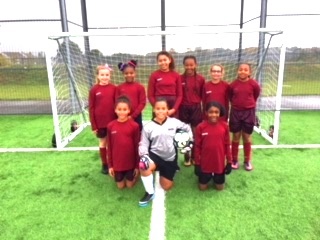 Our first match was against Denbigh, our defenders marked well, tracking their opponents movements closely which gave us a 2 – 1 victory.

Next, we faced Beech Hill. The team managed a well-spaced and confident attack with most of the play in our attacking end which resulted in a well deserved 3 – 0 win.

We faced Ferrars second team for our last match and settled in to a solid attack strategy from the beginning.  Due to our unrivalled determination and focus our defence and goalie had very little action as we ploughed through our final match. We relentlessly challenged the Ferrars defensive players and goalie, scoring 11 goals in total after twenty minutes of play.  Despite a committed effort the Ferrars girls were unable to break through our mid-field players and were unable to score.

This has proved a great start to the Chantry girls football league this year and is a true reflection of their commitment and desire to play their best, whatever the weather and whoever the opponents are.  They really enjoyed the opportunity to perform and were an asset to the Academy on and off the pitch.

The girls will have another opportunity to play against a different set of schools later on in the year, after which the points will added together for the semi-finals and finals.